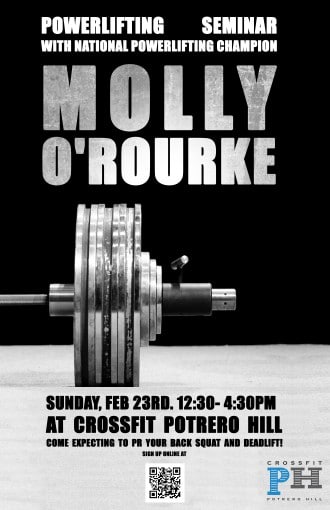 Posted at 14:56h in Weightlifting, WOD by Staging 0 Comments

Powerlifting consists of three lifts: the squat, bench press and deadlift. Training powerlifting-style can be exerting, but lifting heavy weights makes the body stronger. Not just the muscles, but also bones and connective tissues become stronger. “Heavy lifting” is, by definition, training using low reps and challenging weights. Strength is achieved as the body adapts to a training regimen of heavy lifting.

In this class, you will learn how to lift heavy. We will explore some of the following principles/ideas:

* Risk/Reward trade-off, i.e. heavy lifting carries higher risk of injury, but also introduces the possibility of considerable strength increases over long periods of time.
* How to use correct form to minimize the risk of injury.
* Using low reps/high-effort lifting for gaining strength.
* The importance of consistency.
* The importance of rest, recovery and nutrition.
* Using lifting cycles to guide you through long periods (years) of strength increases.
* How to listen to your body.

Molly O’Rourke is an elite competitive powerlifter and former competitive judo athlete. After retiring from judo with two national titles in 2011, she began competing in powerlifting. She has competed at the Olympia four times, the American Cup twice, and took the silver medal overall at the 2013 IPF Classic World Championships in Suzdal, Russia. She is known for performing all her lifts without the use of any equipment, not even a weight belt. She holds California records in the squat (424 pounds), bench press (281 pounds), deadlift (485 pounds) and total (1190 pounds) within the United States Powerlifting Association.

Watch her lifts from the 2014 USPA LA FitExpo

Sorry, the comment form is closed at this time.

This is a single event page with sample content. This layout is suitable for most websites and types of business like gym, kindergarten, health or law related. Event hours component at the bottom of this page shows all instances of this single event. Build-in sidebar widgets shows upcoming events in the selected categories.

We offer 100% free after sales support. Once you purchase you can use our Support Forum backed by professionals who are available to help our customers.

We provide WordPress customization services some of which are: